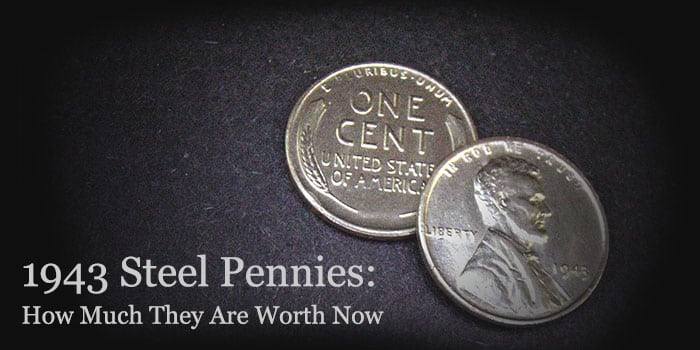 Most steel pennies are worth between 20 cents and 20 dollars. Prices for 1943 penny error coins, like the 1943-D doubled mintmark variety, can reach several hundred dollars.

There are few vintage coins as widely collected as the 1943 steel Lincoln penny. This applies within and even beyond the numismatic realm. This unusual-looking Lincoln Wheat cent is unlike any other United States one-cent coin.

Its zinc-coated steel composition makes this coin resemble a dime more than a typical U.S. penny. But why were these odd coins made, what are they worth, and how does a hobbyist go about collecting 1943 steel cents?

History: Why the Lincoln Cent Was Made of Steel in 1943

The steel penny may seem like a random anomaly to some. Yet the coin has a vital connection to an international historical event. The 1943 steel cent was produced during the height of World War II. This global conflict saw the United States military’s involvement from 1941 through 1945.

During World War II, the Allied Forces needed many essential resources to help optimize success in the war. These materials, including copper and nickel, were used for producing ammunition and artillery.

Therefore, the Lincoln cent and the Jefferson nickel became prime targets for temporary but necessary metallic alterations. An act of Congress in 1942 approved a provisional 35% silver composition for the nickel. This paved the way for an emergency composition for the one-cent coin as well.

A litany of tests and patterns followed for the emergency composition, including plastic and glass. The most cost-effective replacement metal for the Lincoln penny was determined to be a 99% steel planchet with a thin layer of zinc plating. These zinc-coated steel planchets represented an efficient and affordable way to make the 1943 pennies while rationing copper for the war effort. The diameter remained 19.05 mm and the portrait of Abraham Lincoln stayed the same.

However, many in the public were less than thrilled with the alternative composition. The steel cents were often confused with the dime, causing some folks to lose nine cents (or more) in a cash transaction. Others blasted the coins for their tendency to quickly rust once the outer zinc coating wore off the coin, exposing the steel core.

The United States Mint eventually acquiesced to the concerns of the public. After just one year, in 1944 the US Mint resumed using a copper-based composition for the Lincoln cent. This was accomplished by using copper shell casings gathered from military training facilities. These so-called shell case cents, struck through 1946, consist of 95% copper and 5% zinc. This is somewhat different than the typical 95% copper/5% tin and zinc composition generally used at the time for producing Wheat pennies.

Most 1943 steel Lincoln pennies aren’t worth much above their face value (one cent). This may come as something of a surprise to the many who believe these coins are quite valuable. That common misperception likely stems from the popularity of the well-known 1943 bronze cents. This off-metal transitional error was accidentally struck when a few leftover 1942 copper planchets were fed through the presses at the Philadelphia, Denver, and San Francisco Mints.

The 1943 copper penny is extremely rare and valuable. Only a couple dozen pieces were made and exist today, and each is worth about $100,000. While 1943 copper cents weigh about 3.11 grams and don’t stick to a magnet, the more common steel cents (which weigh 2.7 grams) adhere to a magnet. When it comes to evaluating 1943 Lincoln cents, the duo of a magnet and a gram scale has broken many hearts over the years.

The 1943 steel cents are quite common, and more than one billion were struck for circulation. Broken down by each mint, the individual mintages are as follows:

Many 1943 steel cents ultimately corroded beyond recognition or were otherwise lost to time. However, there are still millions of collectible 1943 pennies out there. Hence, these are relatively common coins and are worth relatively little collector value in circulated grades. Most 1943 Lincoln pennies in worn grades (average condition) trade for around 10 cents to 25 cents apiece. Typical examples in uncirculated condition usually realize $1 to $5. Top-level specimens in grades of Mint State 67 or better can go for much more, sometimes hundreds or even thousands of dollars.

There are also some significant varieties among the 1943 steel cents, including the 1943-D/D repunched mintmark. This widely collected variety is worth more than $100 in Extremely Fine 40 and upward of $400 in Mint State 63. While there is no known mintage figure for the 1943-D/D Lincoln cent, it’s estimated that perhaps 3,000 to 5,000 examples may exist across all grades.

Otherwise, non-error steel cents are not in themselves rare. Their value lies in their novelty. How much a steel penny is worth is very dependent on the condition of the coin.

Many coin collectors include the various 1943 pennies among their larger collections of Lincoln cents. However, the trio of business-strike Philadelphia, Denver, and San Francisco 1943 Lincoln steel cents constitute a very popular one-year short set. This set is commonly sold in mass-market offerings. Often they are “reprocessed” (stripped and recoated) pieces assembled in plastic display cases. Then they are sold via general-readership newspaper and magazine advertisements.

There is no right or wrong way to collect 1943 Lincoln cents. Given their novelty, they also make great gifts. Steel pennies have helped spark numismatic interests in folks who otherwise may not have become coin collectors. Indeed, whether collected as part of a short set or incorporated into a larger run of Lincoln cents, the 1943 steel pennies are favorites among non-numismatists and veteran coin collectors alike.