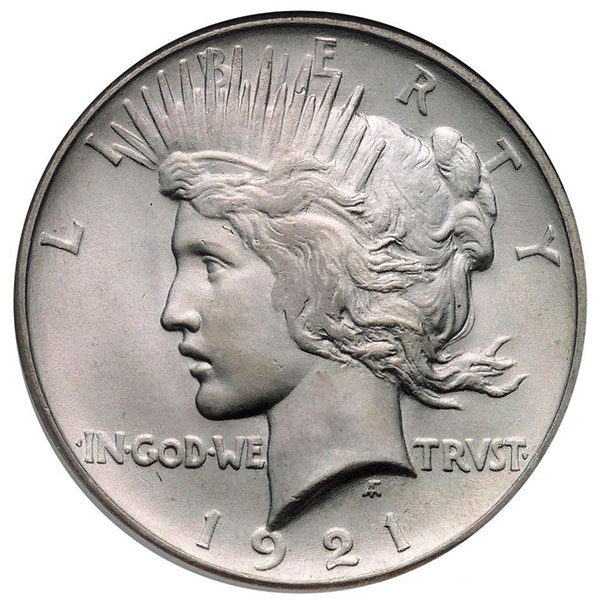 However, the design also held personal significance to the artist.

The designer’s wife, Teresa Cafarelli de Francisci, served as the model for the coin that numismatist Farran Zerbe and others famously dubbed a “peace coin” to honor the end of what was then called “The Great War”[1]. Born in Italy in 1898, Teresa de Francisci was in her early 20s when her medalist husband, also an Italian-born immigrant, enlisted her as his muse for the new silver dollar. The image of Liberty on the coin is not an exact likeness but rather a “composite” of facial features that “typified something of America”[2].

Anthony de Francisci, in choosing Teresa as a model, lovingly fulfilled a dream long held by his young wife. She recalled seeing the Statue of Liberty tower over the ship she and her family were on as they approached the shores of the United States from Italy; a young Cafarelli was heartbroken when she was passed over for the role of the American goddess during a patriotic school play. Her likeness as the basis for Miss Liberty on the beloved Peace dollar lives on decades after Teresa de Francisci passed away at the age of 92 on October 20, 1990 – 26 years to the day after her artist-engraver husband passed away at the age of 77[3].

Accounting for the low mintage of the issue, it is important to note that the design for the new dollar design was not finalized until President Warren G. Harding selected de Francisci’s design on December 19, 1921. That same week, the Mint’s engraving department was hard at work preparing dies to strike the initial coinage and on the final week of the year struck 1,006,473 coins bearing the 1921 date.

These coins were released into circulation in January 1922 to mixed reviews by the mainstream and numismatic press. The Wall Street Journal called the coin “our Flapper Silver Dollar”, while tongues also wagged at the ANA, with ANA President Moritz Wormser arguing that there was “nothing emblematic of peace on [the coin] except the inscription “Peace” itself.”

Time has been more forgiving and the Peace dollar, along with the Morgan dollar that preceded it remain two of the most popularly collected U.S. coins.

The obverse is dominated by a left-facing bust of a young Miss Liberty wearing a tiara of rays that unmistakably resembles the radiant crown upon the head of the Statue of Liberty. Most of Miss Liberty’s hair is contained within a bun at the back of her head, though several locks are seen hanging alongside her neck.

Arcing along the rim on the upper half of the obverse field is the inscription LIBERTY, and centered below the bust of Liberty near the bottom rim is the date 1921. The motto IN GOD WE TRUST appears in a single line of text across the lower quarter of the obverse and spreads across that section of the field, with the words IN GOD WE appearing to the left of Miss Liberty and the word TRUST located behind her neck. Incidentally, the letter “U” in “TRUST” appears as a “V,” which de Francisci employed to represent a “V” for “Victory”[4]. Dots appear between the words IN GOD WE and are also seen on the rim side of the words IN and TRUST. The designer’s monogram, AF, appears below Liberty’s neck in the lower obverse field. The bold rays in the image of the rising sun harmonize with the rays seen in Miss Liberty’s tiara on the coin’s obverse. The legend UNITED STATES oF AMERICA appears along the rim in top half of the reverse. The motto E PLURIBUS UNUM is located directly below in lettering identical in size to the legend. The eagle’s beak breaks the bottom of the “S” in PLURIBUS and visually divides that word from UNUM; meanwhile, a dot punctuates the space between E and PLURIBUS.

The denomination ONE DOLLAR appears across the bottom third of the reverse in a single line of text, with the word ONE inscribed to the left of the eagle by its tail feathers and DOLLAR superimposed over the sun’s rays to the right of the eagle. PEACE is inscribed along the rim below the eagle, atop the rock on which the patriotic bird stands.

The edge of the 1921 Peace dollar is reeded.

Anthony de Francisci was born in Palermo, Sicily in 1887 and emigrated to the United States in 1905. He began his career as a sculptor studying under such notable numismatic artists as James Earle Fraser, Hermon Atkins MacNeil and Adolph Weinman. The Peace dollar (1921-35) is his most famous creation but he also produced several medals. He died in 1964.