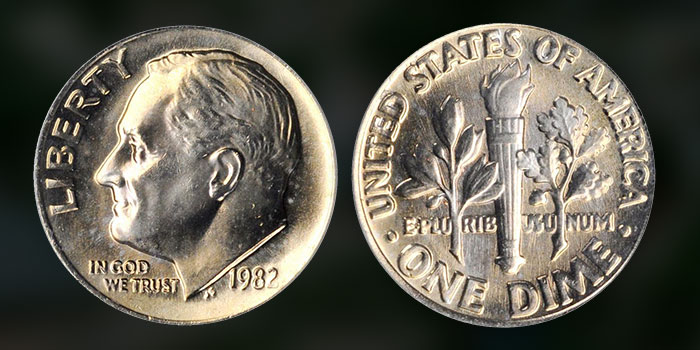 President Franklin Delano Roosevelt’s portrait on the dime was a fitting choice in 1946.

He was a revered figure for many of the “Greatest Generation”: those who lived through the Great Depression (1929-39) and prevailed in World War II (1939-45). Though his administration was not without criticism (numismatists might lament his 1933 Executive Order 6102 that mandated the recall and melting of countless gold coins), he nonetheless enjoyed great popularity both in this country and abroad, and was the nation’s only four-term president.

After Roosevelt died in office, national sympathy gave impetus to honoring him on a circulating coin.

It is commonly accepted that Roosevelt had been afflicted by polio (though that diagnosis has been called into question by recent research). Because the March of Dimes, which funded polio care and research, started during Roosevelt’s first term in office, matching the dime to Roosevelt made sense.

Ninety-percent silver Roosevelt dimes were manufactured from 1946 through 1964. The continual rise in the price of silver bullion in the early ’60s caused the United States Mint to replace the silver in all circulating coins with a copper-nickel clad composition, effective with 1965-dated coins.

Business strike clad Roosevelt dimes have been minted at Philadelphia every year starting with 1965, and at Denver every year since 1968. San Francisco has produced clad Proofs since 1968, and both clad and silver Proofs since 1992. No Proofs were minted in 1965, 1966, and 1967, though Special Mint Sets with those dates were produced. The coins for these Sets were specially prepared, but the quality of finish is somewhere between a Proof and a regular business strike.

Dimes from 1965 through 1967 display no mintmark; Denver (D) and San Francisco (S) mintmarks from 1968 forward are placed on the obverse above the final digit of the date. Philadelphia dimes since 1980 have carried a P mintmark, and a W-mintmarked dime (for the West Point Mint) was issued in 1996. The P and W mintmarks also appear above the last date digit.

Nearly all clad Roosevelt dimes are affordable. Circulation strikes with FB designation (Full Bands, the bands on the torch) and Cameo/Deep Cameo Special Mint Set coins from 1965 through 1967 are priced two to 10 (or more) times higher than coins without those distinctions. Coins with additional price premiums are the No Mintmark issues: the 1982 circulation strike, and the 1968, 1970, and 1983 Proofs. Prooflike circulation strikes are also listed in census/population reports.

Roll hoarders and coin dealers saved 1982 and 1983 Mint output because of the discontinuation of Mint Sets for these two years. And while collector enthusiasm for clad issues has never truly taken off, the clad issues of 1982 and 1983 do not have a backstop of a million or so United States Mint Sets to help collectors fill holes. Adding complexity to the equation, most coins struck for circulation during this period were struck with overused dies and lack the visual “pop” of mint set coins.

The most notable dime from this period is the scarce, thought to be one die, “No-P” variety. The 1982 “No-P” was the result of mint worker oversight when one of the working dies used to strike coinage was not punched with the Philly “P” mintmark. The oddity was discovered in late 1982, with a trio of collectors finding them and bringing their discoveries to light. The dispersal of the variety was geographically limited to a few isolated locations, mostly around Sandusky, Ohio, most notably at the popular amusement park Cedar Point.

The number of 1982 “No-P” dimes that made it out into the wild is unknown, but judging by the submission totals at PCGS and NGC, the variety stands as the most-submitted clad Roosevelt dime for grading outside of the 1996-W, but unlike the not-intended-for-circulation novelty coin, the “No-P” is genuinely scarce and desirable from a numismatic standpoint.

An ungraded example in Extra Fine condition will likely find a buyer at $30, while a Mint State example in Gem or better will bring $300 or more dollars.

Also note that most numismatic references will differentiate the 1982 “No-P” into two classes: Strong and Weak. This denotes the completeness of the strike of the overall coin, with the strong version being nearly completely struck as intended and the weak having many of the outer design details flattened to the point of obliteration. Collect both types if you like, our take is the Strong version is the one most numismatically interesting.

In evaluating the 1982-P Roosevelt dime, one must differentiate between raw and certified, full torch, and normal strike characteristics, not to mention the presence or absence of the P mintmark.

A 1982-P dime that you find circulating in change has a slight numismatic premium and examples do sell routinely on eBay as hole fillers for $1 or $2. Uncirculated examples will appear as struck and without professional quality photography and a visual assurance that the coin is a gem or better example, expect coins to trade for $5 or $6 each.

Once certified, the market for the 1982-P dime opens up dramatically, with each step in the Mint State grading spectrum adding significant arbitrage. A PCGS or NGC-graded 1982-P in MS65 sells for $12 to $15. A grade higher yields prices in the $18 to $22 range. In superb gem, the 1982-P Roosevelt dime is worth about $50.

More particular collectors denote the completeness of the coin’s strike by inspecting the torch on the reverse for full details. A fully struck and detail delineated torch is known as being FULL TORCH or FT (or in the case of PCGS FB for FULL BANDS). The price for FT dimes is roughly double their non-denoted counterparts up to the grade MS67.

The MS67 grade is interesting, as NGC and PCGS diverge in the frequency of grading events. Whereas NGC reports 37 grading events in MS67FT with one in MS68FT, PCGS reports just nine in MS67FB with one in MS67+FB. This scarcity of grading events advances the market prices of the PCGS coins over that of their NGC counterparts REGARDLESS OF WHETHER THE NGC COINS ARE ACCURATELY GRADED. The record price paid for an NGC MS67FB is $1,499.42 paid in September 2018 for an example listed on eBay.

Two NGC MS67FT specimens sold in February 2020 for $100 each and as of the time of publication of this article they have been relisted on eBay by a seller who has littered the holder with stickers and is asking $695 apiece.

The “No P” variety always commands a premium price.

A left-facing profile of Roosevelt occupies most of the obverse space. Inside the smooth rim in front of Roosevelt’s face is the word LIBERTY. IN GOD WE TRUST in smaller letters is positioned below the chin. The date 1982 is squeezed into the space inside the rim and beneath the neck truncation, to the right of the designer’s initials JS, which are just below and oriented parallel to the edge of the neckline. The mintmark “P” is located at the back of the head between the date and the truncation of Roosevelt’s neck.

The edge of the 1982-P Roosevelt dime is reeded.